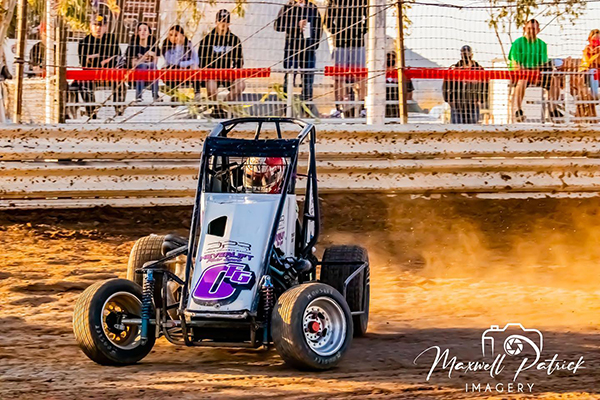 WATSONVILLE, CALIF. (March 18, 2021) – The 2021 Western Midget Racing presented by Masters Design and Construction championship season will fire off Saturday from Adobe Mountain Speedway in Glendale, Ariz., starting the path towards over $5,000 in cash awards up for grabs at the end of the 25-race schedule. Drivers will be ranked by their best 12 finishes in the stock-production powered Midget series that spans Northern and Southern California along with Arizona. Photo by Maxwell Patrick Imagery

Fresno’s David Prickett earned career win number eleven when the WMR held its first event at Adobe Mountain in February. The non-points paying race saw Prickett chased by Arizona’s Cory Brown and Washington’s Greg Jewett at the conclusion of 20-laps of action. New Mexico’s Aasa Flores rounded out a diverse top-four from across the west with California’s Megan Moorhead finishing fifth. Saturday’s event is expected to attract a growing crop of Arizona pilots for the first of six championship paying races in the Copper State in 2021.

Saturday’s action sees pit gates open at 1:00pm with the drivers meeting at 4:00pm Wheel packing will be at 4:30pm with racing to follow. Pit passes are $30 while general admission tickets are $10. CDC guidelines will be enforced including social distancing and masking. Tarps are required under race cars in the pit area as well. National Open Wheel 600s and Arizona Mini Late Models will be also be competing.