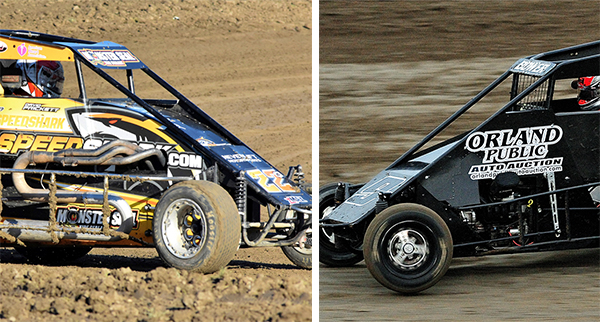 WATSONVILLE, CALIF. (November 9, 2021) – The 2021 Western Midget Racing presented by Masters Design and Construction championship will be decided on Saturday at Adobe Mountain Speedway in Glendale, Ariz. with Brentwood’s Blake Bower and Fresno’s David Prickett dueling for the title. Prickett must win the feature to win the championship. Any other outcome on Saturday night at the one-sixth mile dirt oval will turn the championship in Bower’s favor. Photo by Top Dawg Photos

Each driver enters the 25th race of the year with seven wins out of their best 12 finishes. Bower has added five runner-up performances as well. Prickett’s current slate of best races includes three second place finishes and two third place runs. Out of a maximum 600 points for the season, a win for Bower at Adobe Mountain would leave him with a 592-point campaign. A victory for Prickett would earn him 590 points and set up a tie with Bower. Prickett’s eighth win would serve as the tie-breaker in the $1000-to-win championship.

Bower’s season has been augmented by a championship as a rookie in the USAC Western Midgets with a busy slate of USAC National Midget races in California on tap after this weekend’s WMR finale.

Prickett won the non-points season opener at Adobe Mountain this spring along with two wins and a runner-up finish in the Copper State. Bower’s lone appearance at Adobe on September 18 netted a victory, driving the No. 29 for Cory Brown. Bower will again drive for Brown in the series finale.

Brown has advanced within two points of Santa Paula’s Megan Moorhead in the battle for third in the championship. Brown has podiumed three times at Adobe this season including a win on April 10. Kala Keliinoi rounds out the top-five of the standings ahead of Las Vegas’ Kyle Hawse. Each of these six competitors have met the requirements to contend for the 2021 championship and have run at least 12 races as well.