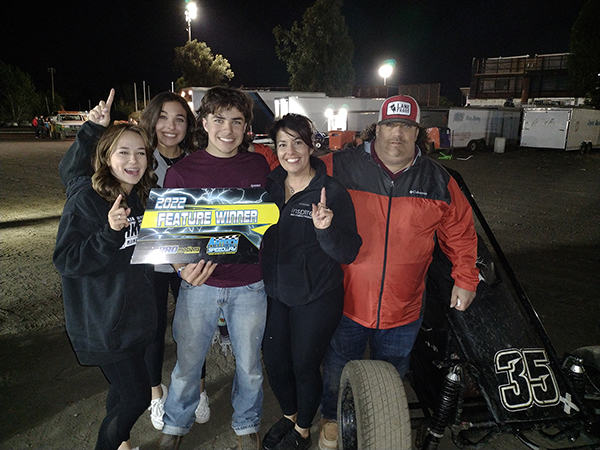 A red flag fell on lap two when Logan Mitchell of Santa Cruz flipped the No. 96 in turn two. The driver of the Mayer Iron-sponsored Boss Chassis was uninjured but unable to continue. The next caution flew when John Bordenave of French Camp and Dunn got hooked together on the backstretch. They were unable to get separated and spent the rest of the feature in the infield.

The most serious stoppage came with a red flag on lap four. Fresno’s Tyler Dolacki flipped wildly in Cameron Beard’s No. 24 entering turn three. Dolacki was able to walk away under his own power, however.

When the dust settled, Bell held the lead over Bordenave and Petrie. After pulling away on the restart, Bell faltered with an engine issue that handed the lead to Bordenave on lap 12. Bordenave paced Petrie over the final eight laps with Las Vegas’ Kyle Hawse finishing third.

Western Midget Racing presented by Masters Design and Construction makes its anticipated first 2022 start of the year at Ventura Raceway up next on April 30.