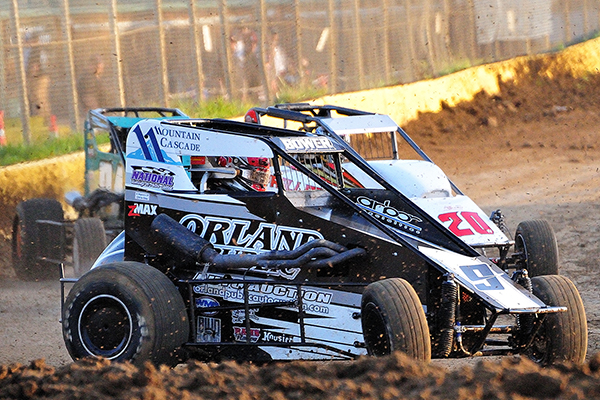 WATSONVILLE, CALIF. (May 12, 2022) – A field featuring at least half a dozen feature winners in Western Midget Racing presented by Masters Design and Construction will race in a doubleheader in Northern California this weekend. The stock production powered Midgets hit the quarter-mile at Ocean Speedway in Watsonville, Calif. on Friday night before making their first 2022 jaunt at Petaluma Speedway on the adobe clay on Saturday night. Photo by Top Dawg Photos

Brentwood’s Blake Bower has stormed to three wins in four attempts to start his championship defense in the series while lifting his career to 11 total wins. Bower will be joined by his teammate Bryant Bell of Oakley, himself a one-time winner in the division in 2021.

Kevin Felkins will field a trio of young Micro Sprint graduates in his machines this weekend. Two-time race winner Sage Bordenave of French Camp, one-time winner Brody Petrie of Napa, and 2021 Petaluma Speedway Micro Sprint champion Caleb Debem of Prunedale will be in action. Lodi’s Nate “Gator” Wait is also in search of his first victory with the circuit. Santa Cruz rookie Logan Mitchell plans a return trip to his home track Ocean Speedway on Friday night as well.

The winningest driver in WMR history is David Prickett of Fresno. Prickett notably won the 2019 Ocean WMR championship and aims for additional trophies this weekend to add to his 19 career victories.

After a serious crash damaged Cameron Beard’s primary Western Midget, Beard has put together another Stealth chassis to compete this weekend. Antioch’s Shawn Arriaga, a winner in WMR and a champion at both Antioch and Petaluma in Sprint Cars, will be at the wheel.

The 2022 championship is currently led by Las Vegas’ Kyle Hawse, who is still looking for a win but led the first half of the feature at Ventura on April 30 as a sign of his continued improvement in the No. 20 machine.

Friday’s action at Ocean Speedway in Watsonville will be joined by a stock car card that includes IMCA Modifieds and IMCA Sport Modifieds. Pit gates open at 2pm while grandstand gates open at 4:30pm. Hot laps are at 5:45pm with heat races to follow. Racing will be streamed live on FloRacing.com

Teams who travel from more than 240 miles to compete at either event will be eligible for a part of the $400 in road warrior money offered at each round this season.