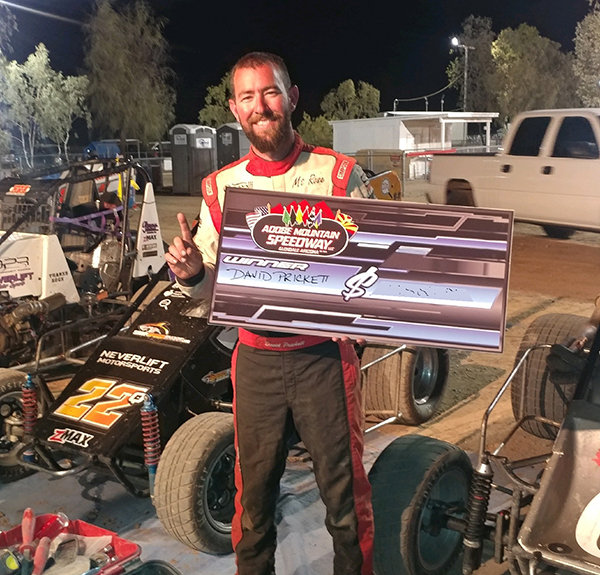 GLENDALE, ARIZ. (May 8, 2021) – Win fourteen for David Prickett of Fresno highlighted the Western Midget Racing action at Adobe Mountain Speedway in Glendale, Ariz. on Saturday night. Prickett became the first repeat Adobe winner in the short history for the production-powered Midgets at the Copper State bullring, in championship competition presented by Masters Design and Construction.

Prickett and his Neverlift Motorsports teammate Rocky Silva from Hawaii split the pair of eight-lap heat races. Nine Western Midgets started the feature after Tyler Rodriguez was unable to start. The ten cars on hand were split four from Arizona, one from Nevada, three Hawaiian drivers, and two from California in a wide-ranging field of abilities and experience levels.

Prickett won from the outside pole with Silva finishing second in his series debut in car #6. Arizona’s Dustin Cormany debuted with a third-place run followed by Santa Paula’s Megan Moorhead in fourth. Another series debutant, Kyle Huttenhow, finished fifth.

Western Midget Racing is preparing for a strong field of competitors for a double header weekend. The series will compete on Friday at Ocean Speedway in Watsonville and Saturday at Petaluma Speedway. Numerous cars are attempting to participate in the events with more detailed information to be announced. Tickets are available for both nights of action or the races can be viewed on Flo Racing as well.