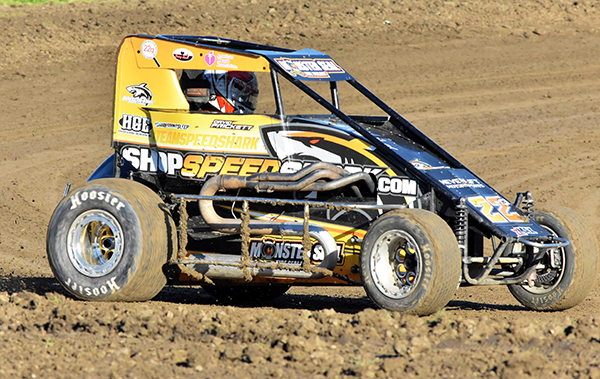 Prickett shared the feature front row with Brentwood’s Blake Bower after the split the night’s heat race action. Prickett and Bower picked up where they left off from their battle in March at the Santa Cruz County Fairgrounds quarter-mile. Bower pulled ahead from the outside pole to lead lap one.

Antonia Boscacci of Mountain View rode over the right rear of Shawn Arriaga of Antioch for a minor tumble, requiring a red flag on lap four.

Bower’s car stopped on the following restart, allowing Prickett to move into the lead. Incoming points leader Megan Moorhead and Cameron Beard had contact into turn one on the restart with Moorhead dropping out of the race a few laps later. Bower came back through the field to challenge Arriaga for second. Bower tagged the berm inside turn one twice, with the second collision sending him airborne for a lap 15 caution.

Western Midget Racing is tentatively scheduled to continue on May 1st at Ventura Raceway.