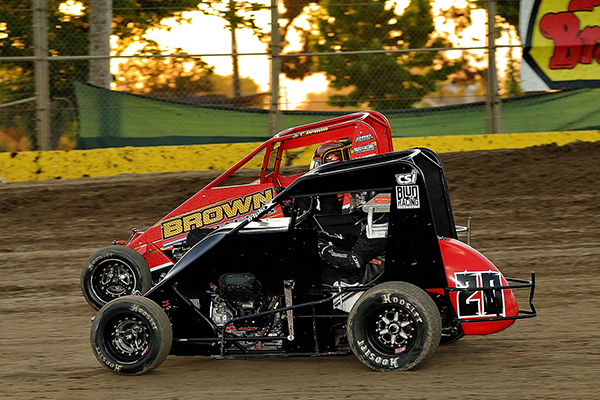 WATSONVILLE, CALIF. (August 10, 2022) – The 19th and 20th races of the 2022 Western Midget Racing presented by Masters Design and Construction season hit the dirt this weekend. Friday night will see the stock production powered Midgets at the Ocean Speedway in Watsonville, Calif. The series’ second-ever stop at Marysville Raceway Park is on deck for Saturday night’s action. Photo by Top Dawg Photos

Friday’s race at Ocean includes Ocean Sprints presented by Taco Bravo and the special Terry Traub Tribute for Hobby Stocks. The entire night can be streamed live on FloRacing.com Saturday’s Marysville action is the championship night for Hobby Stocks plus 360 Sprint Cars, with racing broadcast on NorCalSpeed.TV part of the SPEED SPORT TV platform.

Blake Bower’s back-to-back NorCal sweeps in July have boosted the 2021 champion from Brentwood into the lead of the 2022 series. Bower has won nine of his 13 starts in the tour to enjoy a 32-point advantage over Las Vegas’ Kyle Hawse. Oakley’s Bryant Bell, Peoria, Ariz.’s Cory Brown, and Lodi’s Nate Wait will each hit or exceed 12 starts following this weekend’s action as the championship fight will tighten in the best-of-12 format.

Brown will be making his Marysville Raceway debut and continues to search for a victory in Watsonville as well. Brown is having a career-best campaign in 2022 with three wins at Adobe Mountain Speedway and a runner-up performance at Ocean Speedway on July 29. Greg Jewett returns to Western Midget Racing this weekend in search of his first series triumph as well.

Santa Cruz’ Logan Mitchell is the most-improved rookie driver this season, earning a series-best third place finish at Petaluma on July 30 driving the No. 96x for Mayer Iron.

The top-ten in the championship are Bower, Kyle Hawse, Todd Hawse of Moorpark, Bell, Brown, Wait, Mitchell, French Camp’s Sage Bordenave, Upperlake’s Brody Petire, and Goodyear, Ariz.’s Chloe High. Kyle Hawse and Bower lead the series with ten top-fives each, while Brown has top-fived in nine of his ten starts this season.