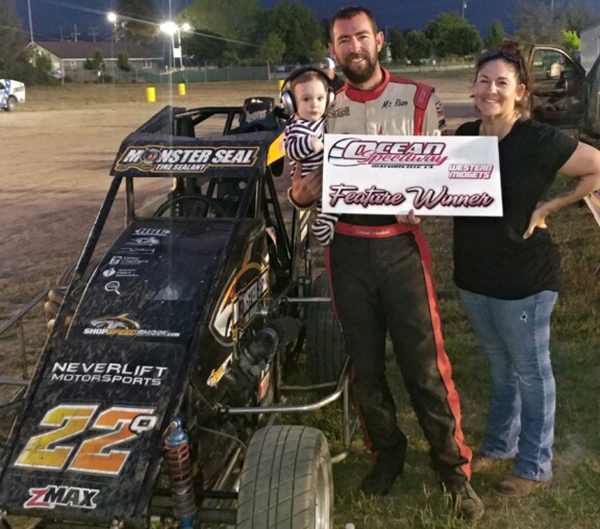 WATSONVILLE, CALIF. (May 14, 2021) – Battling a field full of fresh faces and enthusiasm for the growing Western Midget Racing presented by Masters Design and Construction season, Fresno’s David Prickett affirmed his place at the top of the pedestal. Prickett earned his 15th career win in the production-powered Midget series on Friday night at Ocean Speedway in Watsonville, Calif. The win opened a two-night weekend for the series with a stop on Saturday at Petaluma Speedway on tap.

The 20-lap feature started with Antioch’s Shawn Arriaga losing a wheel as he entered turn one. Sarale took over the top position while Bower bicycled trying to pass on the inside. Prickett attempted a two-for-one on Sarale and Bower before cautions flew for Gary Dunn spun in turn four.

Both Prickett and 2020 Delta Speedway Micro champion Caden Sarale passed Bower on the restart. Prickett then worked up the inside to take the lead on lap seven. Prickett drove ahead for the victory while John Sarale used the outside line to roll ahead of his son Caden for second. Bower and Lodi’s Nate Wait rounded out the top-five.

Western Midget Racing continues on Saturday night at Petaluma Speedway, with tickets available or fans can view the action on FloRacing.com