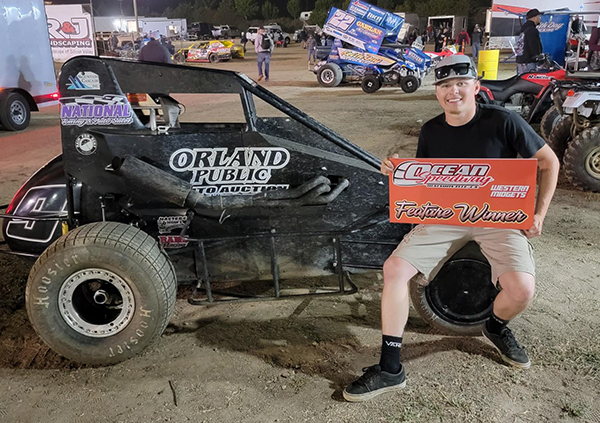 WATSONVILLE, CALIF. (July 17, 2021) – Brentwood’s Blake Bower won his fifth Western Midget Racing presented by Masters Design and Construction feature of his career, and fourth of 2021, during Friday’s 11th Howard Kaeding Classic at Ocean Speedway in Watsonville, Calif. Bower overcame a hard bicycle in turn one early in the feature, preserving over a sore knee for the win.

Santa Paula’s Megan Moorhead started second and led the opening lap of competition with Bower driving into third quickly. The caution flew when Bower bicycled to a stop in turn three while his teammate Antonia Boscacci of Mountain View spun to a stop as well. Bower was briefly checked by medical officials before restarting at the back of the field.

Keoni Texeira took over the lead on the restart, moving underneath Moorhead on the inside of turn four to lead lap three. Antioch’s Shawn Arriaga, the heat race winner, duplicated the pass to grab second from Moorhead on lap six. Bower and points leader David Prickett of Fresno followed suit.

The top-three of Texeira, Arriaga, and Bower ran in close formation as they approached the lapped car of Kyle Hawse from Las Vegas. Bower went to the outside in a bid to steal the lead. Texeira looked low on Hawse in turn two and rode over Hawse’s left rear wheel for a violent flip. Texeira was uninjured but eliminated from the race. Bower led the final four laps for the win over Arriaga, Prickett, Moorhead, and Hawse.

Western Midget Racing has a busy July on tap with their next race on July 24 at Ventura Raceway. They will end the month on July 30 at Ocean Speedway and July 31 at Petaluma Speedway. Each California date for the series is televised on www.FloRacing.com