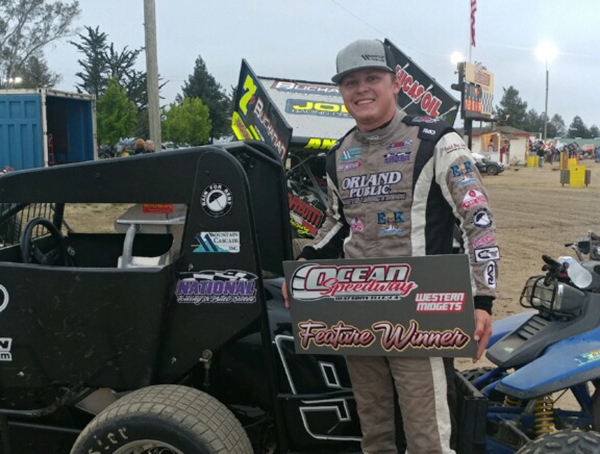 Bower and 2021 points leader David Prickett of Fresno split the eight-lap heat races over the 11-car field on hand at the Santa Cruz County Fairgrounds oval.

Bower and Prickett lined up on the third row for the 20-lap main event. Contact between Prickett and Cameron Beard during the opening lap scramble into turn one ended Prickett’s night early and required a caution flag. When racing resumed, Hawaiian Kala Keliinoi took the lead from Atascadero’s Randi Pankratz. Bower drove into the lead on lap two.

Citrus Heights’ D.J. Freitas made his debut in the No.7 Spike Chassis and drove from eight starting position into second place using the outside line. Freitas went to challenge Bower on a few attempts but Bower drove ahead for the win. Keliinoi won a race-long battle with Pankratz for third with Megan Moorhead of Santa Paula finishing closely behind in fifth.

Western Midget Racing will race at Ventura Raceway along with USAC West Coast 360s and USAC Western Midgets on Saturday night. The open wheel extravaganza can be viewed live on FloRacing.