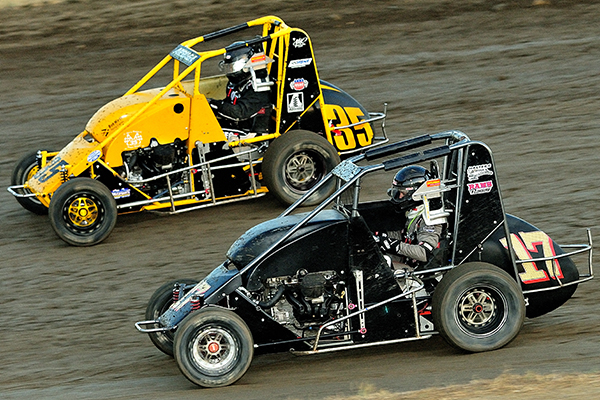 WATSONVILLE, CALIF­. (June 24, 2021) – Western Midget Racing presented by Masters Design and Construction aims for another competitive doubleheader of dirt racing this weekend, with visits to Ocean Speedway in Watsonville and Ventura Raceway on tap. The battles have intensified across the field as the car counts have grown in the stock production powered series, showcased for fans up and down California and Arizona in 2021. Photo by Top Dawg Photos

Both nights of competition will be telecast live around the world on FloRacing.com and are open for grandstand seating as well. Tickets are available both online on each track’s respective website or at the gate.

Although Fresno’s David Prickett leads the championship, he is looking for a return to victory lane. Brentwood’s Blake Bower won two consecutive features across Petaluma and Ventura before French Camp’s Sage Bordenave earned the win two weeks ago at Ocean Speedway. Prickett leads the championship through eight rounds out of the best of 12 series, with other race winners this year including Peoria, Ariz.’s Cory Brown and Lakeside, Calif.’s Darren Brent.

Prickett will field cars for Kevin Woody of Victor, N.Y. and Steve Durant of Fresno out of his Neverlift Motorsports stable this weekend. Woody finished second in his lone WMR start on October 26, 2019 at Ventura Raceway, a race which ended up being the last Ventura appearance by the series until the track reopened on June 5, 2021.

Hawaiian D.J. Freitas will be a new face for Western Midget Racing on Friday night in the Mike McCluney-owned No.7 car before handing the controls over to Ventura fan-favorite Ricky Lewis on Saturday. Their teammate Megan Moorhead in the No.17 ranks second in the championship with her eyes on her first win of the season. Antonia Boscacci of Mountain View, Randi Pankratz of Atascadero, Shawn Arriaga of Antioch, and Cameron Beard of Atwater also are searching for victory this weekend.