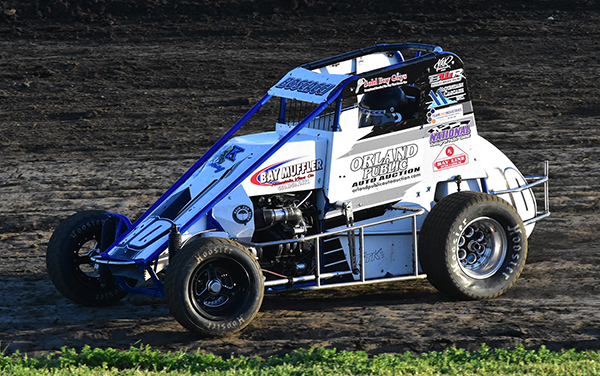 “I’m so thankful for Duke Love and Boscacci Racing for this opportunity. I found out this morning that I was going to be running this car and only my second time in these cars.”

Bell started on the pole for the 20-lap feature and led the opening lap with his teammate Blake Bower of Brentwood in tow. The first caution fell when D.J. Freitas of Herald spun in turn one. Fresno’s Tyler Dolacki stopped under the caution as well. Bower then stumbled on the restart with an issue to extend the caution flag further.

Freitas flipped wildly into turn one for a red flag on lap three but was able to climb out of the car under his own power. A caution for Kyle Hawse of Las Vegas spinning gave Arizona’s Cory Brown a shot at the lead on the following restart. Brown went around the outside of Bell to lead lap nine.

Bell tracked down Brown and hounded him over the final six laps. Bell took the lead on the inside heading into turn three, credited with the lead on lap 18. Bell charged ahead for his first career win over Brown, Watsonville’s Evan Bonnema, Galt’s Matt Streeter, and Santa Paula’s Megan Moorhead.

Bower and Brown split the heat race competition on the night as well. Western Midget Racing continues its championship season on Saturday August 28 from Ventura Raceway.