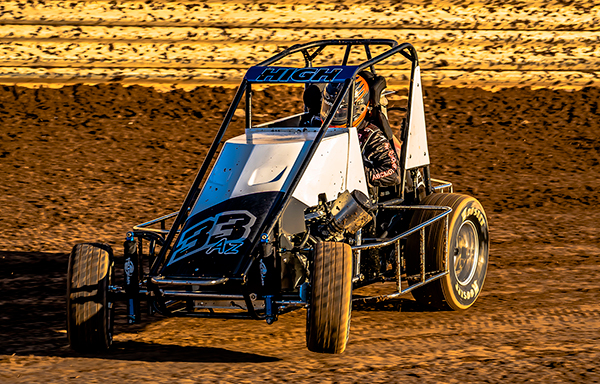 Watsonville, Calif. (November 4, 2022) – Western Midget Racing presented by Masters Design and Construction will close its 2022 championship with the inaugural Tribute to Billy Shuman, Saturday November 12 at Adobe Mountain Speedway. The race in Glendale, Ariz. on the 1/5th mile bullring will pay $1500 to win. NOW600 Non-Wing Micro Sprints will compete in a 50-lap feature along with Restricted and Jr. Sprints action as well. Micro divisions will also compete on Friday night. Photo by Maxwell Patrick Imagery

Speed Union TV will present live coverage of both nights of competition featuring drivers from across the West Coast competing. Race fans can purchase each night for $19.99 individually, or they may purchase a monthly pass for $20 which includes live and on-demand access to all the racing content Speed Union TV has to offer.

The event will be available live at www.SpeedUnionTV.com and on most major app stores such as Apple, Android, Amazon, and Roku.

The busy weekend of racing will honor the late Billy Shuman, a native of Tempe, Ariz. Shuman was a four-time USAC National feature winner across Midgets and Sprint Cars. He also won twice in the CRA Sprint Car competition in his career. His brother Ron Shuman is a National Sprint Car Hall of Famer while nephew Casey Shuman has made a name for himself both on the track and as an official.

Adobe Mountain Speedway has become one of the home race tracks for Western Midget Racing and with the shuttering of several dirt ovals in the region, become one of the homes for dirt open wheel competition in the Copper State. The race on November 12th will the 14th appearance for WMR at the speedway.