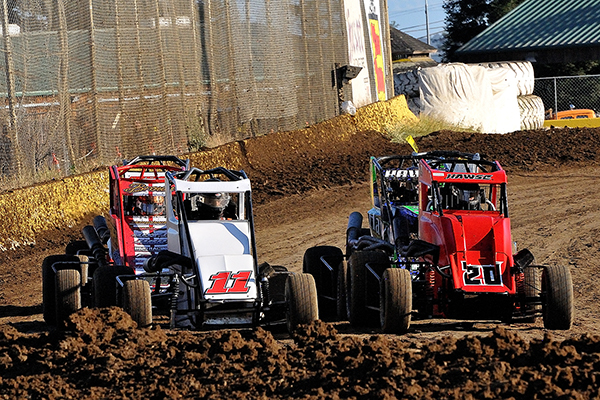 WATSONVILLE, CALIF. (June 23, 2022) – Western Midget Racing presented by Masters Design and Construction returns to one of its home race tracks with Saturday’s event at Ventura Raceway. The race will be the 17th appearance for the stock production-powered Midgets at the one-fifth mile adjacent to the Pacific Ocean. Photo by Top Dawg Photos

Fresno’s David Prickett leads all WMR drivers with four wins at the raceway. 2021 champion Blake Bower of Brentwood is the most recent Ventura winner in 2022, with three total wins at the raceway as part of his 12 career series triumphs.

Las Vegas’ Kyle Hawse leads the championship and has reached 13 starts, beginning his quest to improve his score with throwaway races towards his best 12 finishes. His average feature finish in the No. 20 Sunland Wood Products entry has been a solid 4.3. Among the top-ten drivers in the current standings, both Peoria, Ariz.’s Cory Brown and Bower are tied with a 3.5 average finish. They are also tied for third in the championship after each has made eight starts this season.

Upperlake’s Brody Petrie aims to return to action on Saturday after a violent flip on June 10 at Ocean Speedway ended his NorCal doubleheader weekend early. Petrie has made six starts with one feature win and an average finish of fifth. He will team with Arizona’s AJ Hernandez for car owner Kevin Felkins. Fernandez made his series debut at Ventura in April with a fourth-place finish.

Glendora’s Will Brown will make his Western Midget Racing debut in the Paul Sanders-owned No. 22. The 18-year-old has finished in the top-six in all eight starts he has made this year in California Lightning Sprints. Brown is the 2021 Speedway Sprints championship at Victorville’s Wheel2Wheel Raceway as well.

Saturday’s event has general admission seating with tickets available at VenturaRaceway.com Tickets are priced $18 adults, $15 for seniors/military/students, and 12& under are free.