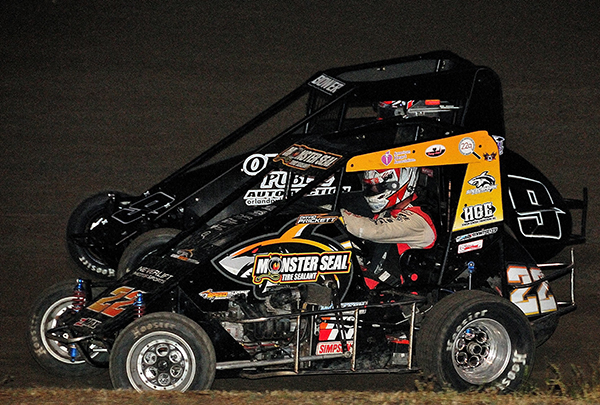 WATSONVILLE, CALIF­. (June 10, 2021) – Western Midget Racing will compete in Friday’s Pombo/Sargent Classic at Ocean Speedway as the championship battle continues in the series presented by Masters Design and Construction. Friday’s race includes the NARC/King of the West 410 Sprint Cars. It honors Al Pombo and Marshall Sargent, the Hall of Fame drivers who won over 170 races combined in San Jose racing history.

Fans in the grandstands can purchase tickets at www.OceanSpeedway.com or at the gate. Race fans who are unable to attend can see every lap of the exciting four division show at FloRacing.com

WMR enjoyed its largest ever car count in the young series’ history on Saturday at Ventura Raceway, with 18 of the 2.3 and 2.4L production-powered Midgets in the pits. Brentwood’s Blake Bower drove the No.9 Orland Auto Auction Spike Chassis to his second consecutive series win, taking the 20-lap feature ahead of points leader David Prickett of Fresno. Prickett leads Santa Paula’s Megan Moorhead after seven rounds of competition, with a driver’s best 12 finishes after the busy season counting towards the championship. Peoria, Ariz.’s Cory Brown, Bower, and Lakeside’s Darren Brent round out the top-five.

Many young drivers with Micro Sprint experience are expected to participate on Friday night. French Camp’s Sage Bordenave will make his second start for Kevin Felkins, joined by newcomers Brody Petrie of Napa and Caleb Debem of Prunedale. Nate Wait of Lodi will aim to improve on his runner-up finish to Bower at Petaluma as well. David Prickett’s Neverlift Motorsports will add Oakley’s Bryant Bell to the series. Bell won a Restricted feature at Dixon Speedway in 2020 and ranks fourth in the 2021 Wingless Micro points standings.