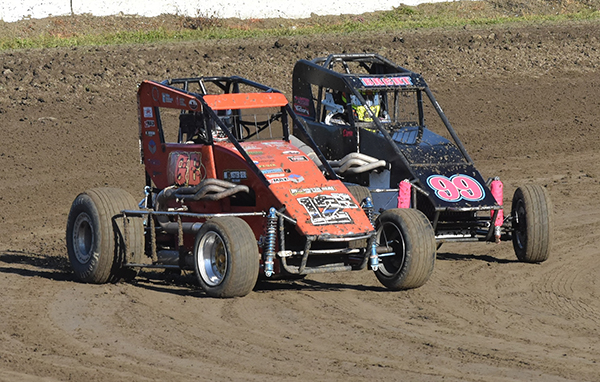 WATSONVILLE, CALIF. (Sept. 17, 2021) – The 19th round of the Western Midget Racing presented by Masters Design and Construction championship will see the stock production Midgets return to Glendale, Ariz. at the Adobe Mountain Speedway on Saturday night. The series’ fifth appearance at the one-fifth mile will be the fourth points race in the Copper State for the circuit in 2021. Fresno’s David Prickett has won twice at Adobe including most recently in May. Other winners include home state favorite Cory Brown of Peoria and Lakeside, Calif.’s Darren Brent. Photo by Top Dawg Photos

Prickett aims to get back into the win column this weekend, facing a 16-point deficit to series points leader Blake Bower. Bower has yet to make a stop at Adobe Mountain but will need to make at least one to be eligible for the 2021 series championship. Santa Paula’s Megan Moorhead ranks third in the standings after equaling her career-best finish with a second-place run last weekend at Ventura. The mark was previously set by the driver of the no. 20w on April 10 at Adobe Mountain.

Moorhead chased Stockton’s Caden Sarale in the Kevin Felkins-owned no. 35s across the finishline at Ventura Raceway. WMR returns to Ventura on October 16 and October 30.

Brown is fourth in the championship standings despite a 19th place effort at Ventura. Hawaiian Kala Keliinoi is just eight points ahead of Antioch’s Shawn Arriaga in the battle for fifth in the standings. Las Vegas’ Kyle Hawse ran a career-best fourth at Ventura and sits seventh followed by Cameron Beard of Atwater, French Camp’s Sage Bordenave, and Brent as the top-ten.