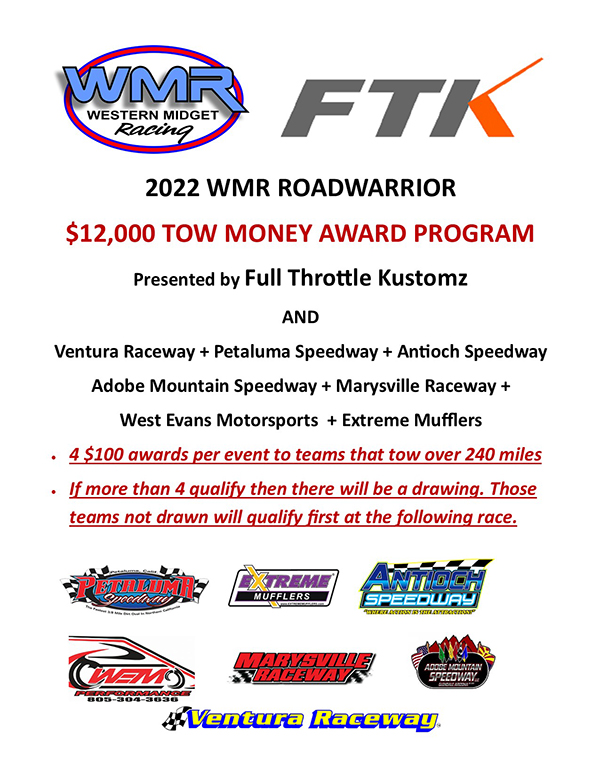 WATSONVILLE, CALIF. (March 17, 2022) – Western Midget Racing presented by Masters Design and Construction has partnered with its race tracks and sponsors, such as Full Throttle Kustomz, Extreme Mufflers, and West Evans Motorsports, to offer $400 in cash awards for the furthest travelers at each race in 2022.

This award has been made possible by sponsors such as Full Throttle Kustomz and is set up to support the teams traveling great distances to challenge for the 2022 championship. The points format for this year’s stock production-powered series will mirror last year, which created a down-to-the-wire duel between eventual champion Blake Bower of Brentwood and the series’ most successful driver, Fresno’s David Prickett. Drivers will be scored by their 12 best main event finishes. A driver will only be eligible for the title after making at least one start at each venue on the series schedule. Number of starts will be the initial tie-breaker followed by wins, second place finishes, etc.

Western Midget Racing now turns its attention to the Golden State with the first weekend of California action beckoning on April 1st and 2nd. The series will compete at Watsonville’s Ocean Speedway before its inaugural jaunt at Marysville Raceway Park.