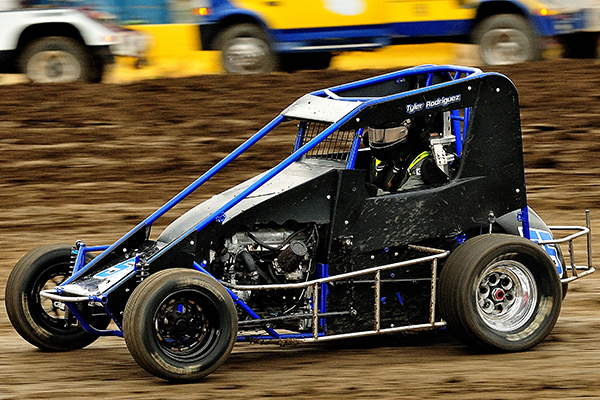 WATSONVILLE, CALIF. (October 1, 2021) – Western Midget Racing presented by Masters Design and Construction returns to Glendale, Ariz. on Saturday night at the Adobe Mountain Speedway. The stock production Midget series is charging towards its championship in November, where a driver will win $1,000 for their best 12 finishes. Photo by Top Dawg Photos

Brentwood’s Blake Bower and Fresno’s David Prickett have dueled for the championship, with Bower scoring victory in his debut Adobe Mountain appearance on September 18. Their duel continued at Antioch Speedway before the event was postponed due to an incident involving Watsonville’s Tyler Slay. WMR continues to send thoughts and prayers to the Slay family for a speedy and full recovery. A potential Antioch makeup date is still being considered at this time.

Prickett’s stable will be loaded for action at the 1/5th mile this weekend. Hawaiians Rocky Silva and Pat Kop will be in action along with Arizona driver Ashton Corey. Other Arizona drivers who have competed with WMR in 2021 have included Peoria’s Cory Brown, who ranks fourth in the championship, Peoria’s Kyle Klein, Surprise’s Kyle Huttenhow, and Tyler Rodriguez of Phoenix.

The month of October sees WMR competing at Petaluma on October 9 along with visits to Ventura Raceway on October 16 and October 30. The season finale is slated for November 13 back at Adobe Mountain Speedway.