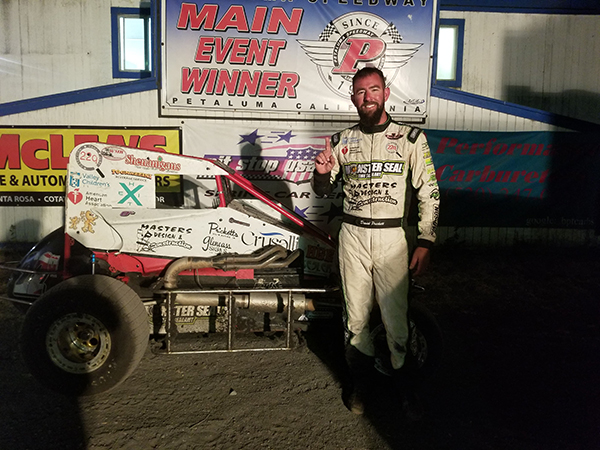 SANTA CRUZ, CALIF. (July 19, 2020) – Fresno’s David Prickett drove the #22q Henson General Engineering Spike/EcoTec to victory in both Western Midget Racing events this weekend, taking wins Friday at Ocean Speedway Watsonville and Saturday at Petaluma Speedway. The wins lift Prickett to nine career WMR wins for the 2019 Ocean Midget champion and give him bragging rights as the winner for the series’ debut at Petaluma.

Prickett followed Bower for several laps before taking the lead on lap seven. Watsonville’s Tyler Slay stopped on the backstretch after a spin, drawing the lone caution of the race on lap 11. Bower bicycled hard in turn one with three to go and was unable to challenge Prickett to the finish.

Central Point, OR’s Theron Smith won a lengthy battle for third ahead of Slay and Tyler Dolacki of Fresno in fifth.

On Saturday at Petaluma, San Diego’s Darren Brent made his debut start in the series from the pole position over a 10-car starting field. Slay took over the lead from the start with Brent shuffled back to fourth. Prickett followed Slay into second from the fourth starting position.

Prickett took over the lead on lap five with a pass down the backstretch. A caution for Jon Santibanes spinning in turn one allowed Watsonville’s Evan Bonnema to continue to move forward from his tenth starting position. The race went red on lap 17 when Brent tagged the backstretch wall and flipped. He was uninjured.

Bonnema challenged Slay all the way to the wire but was unable to claim the second position. Prickett led Slay, Bonnema, Tyler Dolacki, and Smith the top-five finishers.