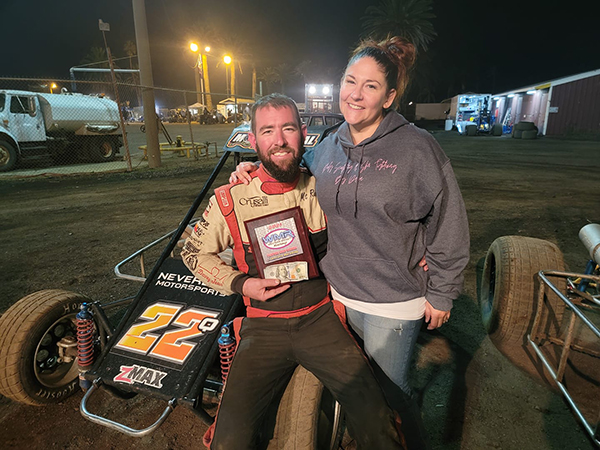 The narrow victory in the penultimate round gives Prickett control of his championship destiny at Adobe Mountain Speedway in Glendale, Ariz. on November 13. A win would tie Prickett in the total points with Bower, with the tiebreaker for the $1,000 championship then going in Prickett’s favor. Bower or any other driver in WMR, can play spoiler in the finale by keeping Prickett out of victory lane.

Peoria, Arizona’s Cory Brown and Bower split the heat races for the 16 cars on hand for the stock production Midget series. Prickett lined up for the 20-lap feature in fifth ahead of Bower in sixth and Brown in seventh.

Terry Nichols led the first five laps of competition before Bower and Bakersfield’s Brody Fusion entered the mix. Nichols then retook the lead until lap 12 when Bower took over the top position. Prickett and Bower exchanged the lead multiple times over the final eight laps. Prickett made the decisive maneuver on the final lap, winning by just .158 seconds. Bower finished second followed by Fuson. Napa’s Brody Petrie charged from tenth on the grid for a fourth place performance with Brown rounding out the top-five.