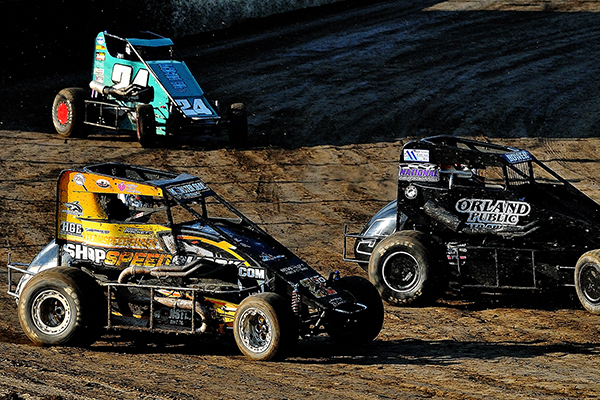 WATSONVILLE, CALIF. (October 28, 2021) – Brentwood’s Blake Bower and Fresno’s David Prickett are separated by just four points in the 2021 Western Midget Racing presented by Masters Design and Construction championship with the penultimate round this Saturday at Ventura Raceway. The narrow title fight for the stock production Midget series is contested across a driver’s best 12 finishes out of the 25-race series, with $1,000 on the line for the champion. Photo by Top Dawg Photos

Bower has triumphed seven times this season with Prickett seeing victory lane on six points-paying occasions. A win on Saturday for Prickett could move the drivers into a points tie, with Prickett needing to also win at Adobe Mountain Speedway in Arizona for a bid at the championship. A victory for Bower at Ventura clinches the 2021 championship.

The win or go home scenario has electrified an outstanding season for WMR, where more than 30 cars and more than 60 drivers have participated in the championship. Santa Paula’s Megan Moorhead ranks third with only a 14-point cushion over Arizona’s Cory Brown. Hawaiian Kala Keliinoi rounds out the top-five in the standings.

Close competition has led to 11 different winners this season including the most recent visit to Ventura where Randy Moody picked up his first victory in several seasons.

The season finale for Western Midget Racing will be on November 13 from Adobe Mountain Speedway in Glendale, Ariz.