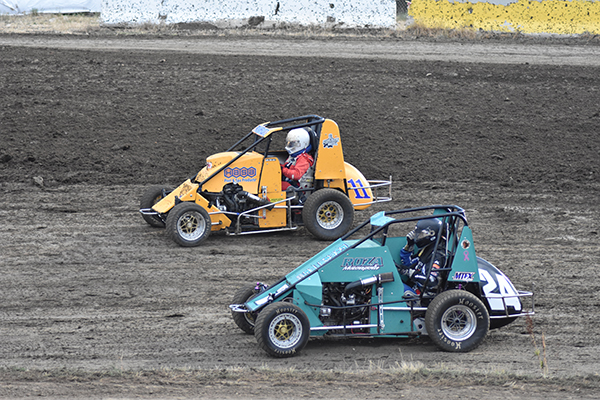 SANTA CRUZ, CALIFORNIA (July 14, 2020) – After a successful return to action last Friday night for Western Midget Racing at Ocean Speedway in Watsonville, the series continues this weekend for a doubleheader of action. The Ecotec-powered Midget cars will race Friday at Ocean Speedway and then make their debut at Petaluma Speedway on Saturday, wrapping up a stretch of three events in eight days.

Defending Ocean Speedway WMR champion David Prickett of Fresno picked up where left off with his seventh career victory on Friday night. Prickett topped a 12-car turnout. He was followed across the line by 17-year-old Jackson Dukes of Clovis and Watsonville’s Tyler Slay, who won the heat race. 2019 Ventura WMR champion Randi Pankratz failed to finish the main event.

Friday’s jaunt at Ocean Speedway is part of the opening night of the tenth Howard Kaeding Classic, adding to the gravity of the proceedings. Western Midget Racing will be joined by the Ocean Sprints presented by Taco Bravo, IMCA Sport Mods, and Hobby Stocks in action. Much of the same competitors who raced in the season opener are expected to return on Friday, including Dixon Speedway 2019 Non-Wing Micro champion Norman Harley Rose, Jon Santibanes of Fairfield, Tyler Dolacki of Fresno, and Blake Bower of Brentwood.

On Saturday, the WMR will travel 125 miles north to Petaluma for its debut appearance at the Sonoma-Marin Fairgrounds 3/8ths mile oval. All four divisions competing will be open wheel, including the USAC/BCRA Midgets, Wingless Spec Sprints, and Non-Wing 600 Micro Sprints also competing. It will mark the third venue for WMR and the largest track the series has competed on. It should serve as another showcase for the performance of the affordable GM production engines, built from 2006-12.

Both events will be streamed by Speed Shift TV and Flo Racing as both venues are closed to spectators due to the COVID-19 Pandemic.

For more information about the Western Midget Racing series, visit www.WesternMidgetRacing.com or follow the series on Facebook.