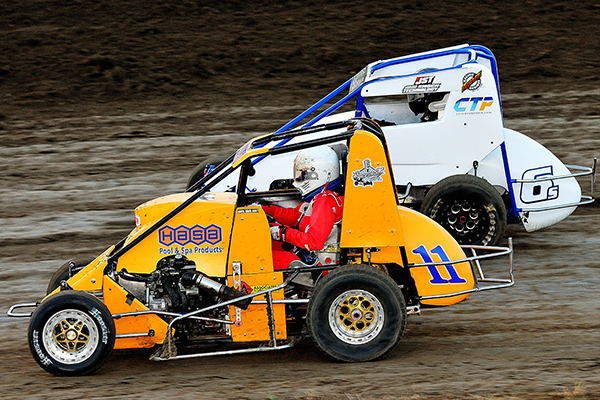 WATSONVILLE, CALIF. (October 14, 2020) – Western Midget Racing will run its first of back-to-back appearances at Petaluma Speedway, sharing the card with the USAC West Coast 360s and USAC & BCRA Midgets on the Adobe Clay surface at the Sonoma Marin Fairgrounds. WMR was originally scheduled to compete at Petaluma over Labor Day Weekend and will instead compete the next two weekends at the one-third mile oval.

The series made its debut run at Petaluma on July 18th with Fresno’s David Prickett driving the #22q Henson General Engineering Spike/EcoTec to victory. He was followed by Tyler Slay of Watsonville, who won the Ocean Speedway round for WMR on August 7th in a duel with Prickett. Watsonville’s Evan Bonnema finished third followed by three-time USAC Western Midget winner Tyler Dolacki of Fresno, and Central Point, Oregon driver Theron Smith.

Slay drives the Slayer Racing Engines Spike/Ecotec. The ten-year racing veteran is the 2018 USAC Speed2 Western States Dirt champion before coming over to WMR. Slay will be joined in the Chris Slay-owned stables by Washington’s Stephen Blankenship. The Tenino, Wash. driver previous raced asphalt Late Models and is dipping his toes into dirt midgets on Saturday.

Prickett will be joined by teammates Sean Quinn of Clovis and David Raquenio of Fresno. Quinn drives in support of Racing for Veterans and will compete in the black and purple #0FG TCR/EcoTec. Tyler Dolacki of Fresno also pilots a TCR/EcoTec, driving the #50 for car owner Mike McCluney. The 27-year-old out of Fresno is a three-time USAC Western Midget winner and 2011 USAC Focus Focus dirt champion. Also driving a Spike Chassis for Mike McCluney is multi-time BCRA champion Nick Foster, Jr. Brentwood’s Blake Bower is a Micro Sprint graduate driving for Bay Muffler in a Stealth/Ecotec.

Western Midget Racing will follow this two-step of Petaluma races with its final 2020 stop at Ocean Speedway in Watsonville on Friday November 6. Adobe Mountain Speedway in Glendale, Ariz. has invited WMR to compete on a trio of Saturdays beginning on December 19. The Midgets are also scheduled on January 30 and February 27. No points are being awarded in the 2020 Western Midget Racing division.

This Saturday at Petaluma, pit gates open at noon with hot laps beginning at 4:00 pm. Tarps are required in the pits under each car at Petaluma Speedway to capture fluids. Racing begins at 6:00 p.m. and can be streamed live on FloRacing.com with the grandstands remaining closed.