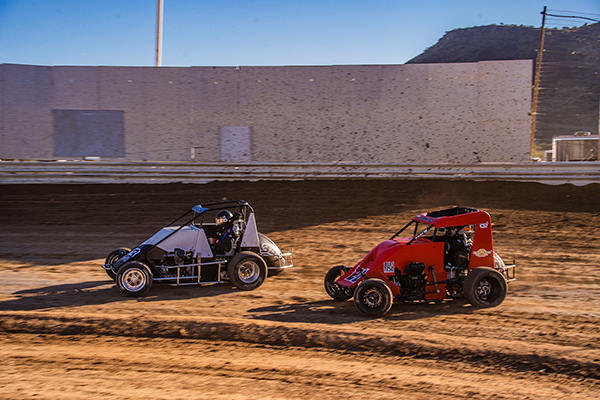 The 2022 campaign opened with three consecutive races at Adobe Mountain, with 2021 champion Blake Bower of Brentwood, Calif., Surprise, Ariz.’s Drake Edwards, and Peoria, Ariz.’s Cory Brown earning the wins. Brown went on to win again in both April and May, giving him three consecutive wins on the 1/5th mile bullring located north of Phoenix.

Since the May 7 Adobe round, WMR has staged 12 races across five different tracks with Bower emerging with the championship lead. Bower leads Las Vegas’ Kyle Hawse by 64-points in the championship. Oakley’s Bryant Bell has advanced to third in the standings. Brown is tied with Lodi, Calif.’s Nate Wait for fourth in the championship.

Brown is the highest points earner in the five Adobe races this year followed by Hawse and Surprise, Ariz.’s Kyle Huttenhow in the No. 57 Triple-X Chassis. Chloe High of Goodyear, Ariz. has driven the No. 3AZ Ellis Chassis to fourth in the Adobe rundown ahead of Phoenix’s Lonnie Oliver. Other drivers with multiple starts at Glendale this year include Todd Hawse of Moorpark, Calif., Goodyear, Ariz.’s Tyler High, Tyler Rodriguez of Peoria, Ariz., and Fresno’s David Prickett.

Western Midget Racing will be joined by winged NOW 600 Micro Sprints, Mini Late Models, and Jr. Sprints. Pit gates open at 2pm with the pit meeting at 5pm and hot laps to follow.