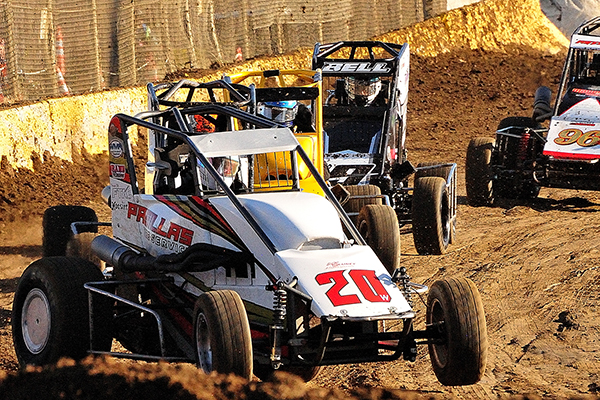 WATSONVILLE, CALIF. (August 24, 2022) – For the third time this season, Western Midget Racing presented by Masters Design and Construction will compete at the seaside Ventura Raceway. Ventura serves as the 21st event of the stock production Midget campaign with a talented group of drivers ready to race. Photo by Top Dawg Photos

2021 champion Blake Bower of Brentwood scored his 19th career victory at Marysville on August 13, tying David Prickett of Fresno for all-time WMR victories. The win also gives Bower 11 wins in a best 12 finishes series, meaning a win on Saturday night would sew up a perfect season for the driver of the No. 9 Orland Public Auto Auction entry. Bower won the May jaunt at Ventura before Drake Edwards won in June.

Bower holds a 64-point advantage over Las Vegas’ Kyle Hawse in the No. 20 for Sunland Wood Products. Hawse continues his drive for his first series win on Saturday. Bower’s 15-year-old teammate Bryant Bell of Oakley, Calif. has driven the No. 09 Toyota Walnut Creek-backed machine to third in the points. Arizona’s Cory Brown and Lodi’s Nate Wait round out the top-five thus far.

Logan Mitchell of Santa Cruz has rapidly improved over the summer months since working with former WMR race winner Tyler Slay on race set ups. Mitchell is expected in action on Saturday in the No. 96x for Mayer Iron. He is also chasing Todd Hawse of Moorpark, driver of the No. 31 for Hawse Abbey Carpet, for sixth in the standings.

A healthy fleet of young drivers will be piloting entries prepared for Mike McCluney and Kevin Felkins this weekend. Among them is eight-time Delta Speedway Micro champion Caden Sarale of Stockton. Multi-time Micro Sprint champion in California TJ Smith of Fresno returns after a runner-up finish in his debut at Ocean Speedway on August 12. AJ Hernandez looks to improve upon a third-place finish at Ventura in June while Concord’s Adam Teves carries a pair of second-place finishes into his Ventura WMR debut.