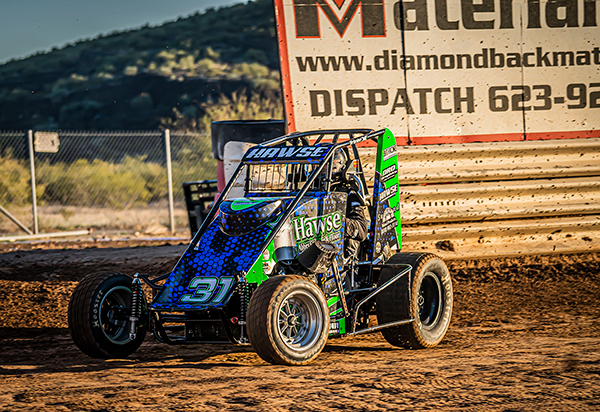 Watsonville, Calif. (October 26, 2022) – Western Midget Racing presented by Masters Design and Construction will close its 2022 championship with the inaugural Tribute to Billy Shuman, Saturday November 12 at Adobe Mountain Speedway. The race in Glendale, Ariz. on the 1/5th mile bullring will pay $1500 to win. NOW600 Non-Wing Micro Sprints will compete in a 50-lap feature along with Restricted and Jr. Sprints action as well. Three Micro divisions will also compete on Friday night. Photo by Maxwell Patrick Imagery

The busy weekend of racing will honor the late Billy Shuman, a native of Tempe, Ariz. Shuman was a four-time USAC National feature winner across Midgets and Sprint Cars. He also won twice in the CRA Sprint Car competition in his career. His brother Ron Shuman is a National Sprint Car Hall of Famer while nephew Casey Shuman has made a name for himself both on the track and as an official.

The championship race for Western Midget Racing honoring Billy Shuman should be a hotly contested one with both the overall title and the 2022 Adobe Speedway WMR championships on the line. Champions will be honored after the races with a special pit side awards ceremony. Media coverage for both the race and the awards ceremony will be announced soon.

Adobe Mountain Speedway has become one of the home race tracks for Western Midget Racing and with the shuttering of several dirt ovals in the region, become one of the homes for dirt open wheel competition in the Copper State. The race on November 12th will the 14th appearance for WMR at the speedway.

Western Midget Racing competes on October 29 at Ventura Raceway as part of the salute to Wally Pankratz during his retirement race night. Pankratz will compete in the VRA Senior Sprints while his daughter Randi, the 2019 WMR Ventura champion, returns to WMR as a teammate to 2019 Ocean WMR champion David Prickett of Fresno.